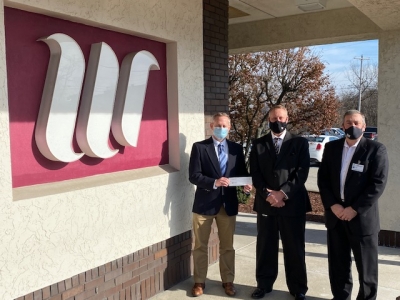 Since 1984, the WHS Occupational Medicine practice has partnered with businesses in this region to assist them with employee healthcare needs. WHS offers a full service Occupational Medicine Clinic with offices in Washington and Greene County. Services are tailored to meet the needs of each business client, from acute injury care to non-injury related services, such as; employment physicals, DOT exams, drug screening, respirator/audio testing, and more.

“Receiving support from partners like CONSOL is instrumental in helping us serve and care for our community and their healthcare needs,” said Brook Ward, President and CEO of Washington Health System. “CONSOL has donated to the WHS Foundation for a number of years and we appreciate the continued support and partnership.”

The donation will be used for the health system’s greatest needs. At this time, some of those needs include the COVID assistance fund (medications, PPE, disinfecting treatments) and the expansion of telemedicine.

CONSOL Energy Inc. (NYSE: CEIX) is a Canonsburg-based producer and exporter of high-Btu bituminous thermal and crossover metallurgical coal. It owns and operates some of the most productive longwall mining operations in the Northern Appalachian Basin. Our flagship operation is the Pennsylvania Mining Complex, which has the capacity to produce approximately 28.5 million tons of coal per year and is comprised of 3 large-scale underground mines: Bailey, Enlow Fork, and Harvey. The company also owns and operates the CONSOL Marine Terminal, which is located in the port of Baltimore and has a throughput capacity of approximately 15 million tons per year. In addition to the ~698 million reserve tons associated with the Pennsylvania Mining Complex, the company also controls approximately 1.6 billion tons of greenfield thermal and metallurgical coal reserves located in the major coal-producing basins of the eastern United States. Additional information regarding CONSOL Energy may be found at www.consolenergy.com.

The CONSOL Cares Foundation was established in early 2019. Our mission is to improve and strengthen the communities in which CONSOL operates to make them better places to live, work, and prosper, by creating access to opportunities, and to strengthen their resilience and cohesion through focused giving to promote the health and safety of these communities. The CONSOL Cares Foundation is overseen by a Board of Directors who meet quarterly to review grant requests.