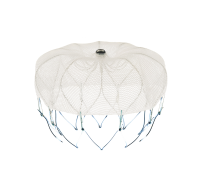 The WATCHMAN Device is intended for percutaneous, transcatheter closure of the left atrial appendage (LAA). Patients with non-valvular atrial fibrillation who are at increased risk for stroke and systemic embolism, are suitable for warfarin and seek a non-pharmacologic alternative to warfarin may be eligible for a WATCHMAN Device. By closing off the LAA, a thin, sack-like appendix arising from the left side of the heart that is believed to be the source of a majority of stroke-causing blood clots in people with non-valvular AF1, the risk of stroke may be reduced and, over time, patients may be able to stop taking warfarin.

Non-valvular atrial fibrillation (AF) is an irregular heartbeat that can lead to blood clots, stroke, heart failure and other heart-related complications. AF is the most common cardiac arrhythmia, currently affecting more than five million Americans.2 Patients with AF have a five-fold increased risk of stroke due to blood stagnating from the improperly beating atrium and the resulting blood clot formation.3 Stroke is more severe for patients with AF, as they have a 70% chance of death or permanent disability.3 The most common treatment for stroke risk reduction in patients with AF is blood-thinning warfarin therapy. Despite its proven efficacy, long-term warfarin therapy is not well-tolerated by some patients and carries a significant risk for bleeding complications. Nearly half of patients eligible for warfarin are currently untreated due to tolerance and adherence issues.4

Implanting the WATCHMAN Device is a one-time procedure that usually lasts about an hour and is typically conducted with general anesthesia. The WATCHMAN Device is implanted through a femoral access via a trans-septal approach by using a catheter-based delivery system. The device is designed to permanently close off the LAA, believed to be the source of a majority of stroke-causing blood clots,1 and thereby avoid the migration of emboli to the brain. Following the procedure, patients typically need to stay in the hospital for 24 hours.

The WATCHMAN LAAC Device is approved in more than 70 countries and over 10,000 implants have been performed worldwide.

For more information or to schedule an evaluation call the